PACC TEXAS is Top Fil – Am Organization in the Nation!

Proudly score an other one for the Filipinos in Texas. The Philippine – American Chamber of Commerce of Texas, the main organizing sponsor of the popular U.S. Trade Missions to the Philippines and the award – winning Consular Outreach programs in Dallas and Houston that have helped more than 20,000 Filipinos in Texas and neighboring states more than $13 million in travel costs by not going to LA , was voted Most Outstanding Fil – Am Organization in the U.S . in the category of Community Service, Trade Promotion and Aid to the Philippines.

The special award, the first of its kind, was given to the Texas Chamber organization by the National Federation of Filipino American Associations (NAFFAA) at its recent nati onal convention in San Diego last August. The award is called Alex Esclamado Memorial Award for Outstanding Community Leadership, named after the late NAFFAA founder, Philippine News publisher and community activist Alex Esclamado. Because of Esclamado’s 4 0 – year vigilance advocating equal rights and unity for Filipinos in America, some historians have described him as a modern – day Cesar Chavez. The national federation that Esclamado founded 16 years ago is now active in 50 states comprising 12 regions. Ther e are now more than 3,000 Filipino organizations in the country , representing more than 3.5 million Filipinos. Region 6 (Texas and southwest states) was headed by Gus Mercado of Dallas for 10 years and is now under the leadership of Anthony Guevara of Hous ton who led a large delegation of Texas youth leaders to the national convention . 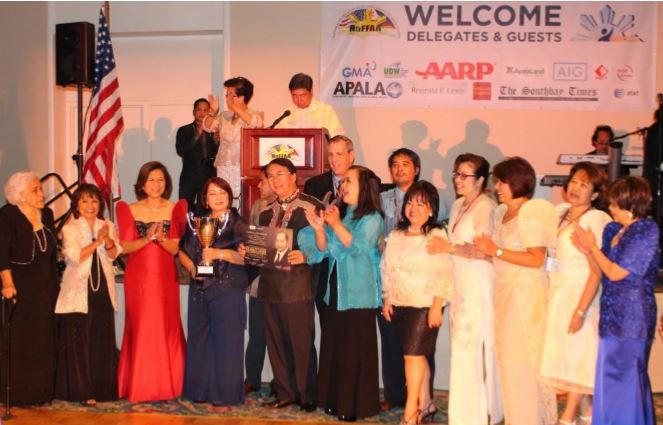 In a post – awarding interview by Media sponsor GMA7 Pinoy TV which was broadcast in the Philippines and worldwide, Ethel and Gus Mercado thanked the organizers and sponsors of the Alex Esclamado Memorial program, and recognized the officers and members of PACC Texas in Houston and Dallas for their dedication and hard work that made the special national award possible. “We wish all our volunteers could all be here tonight, because without their personal sacrifices, we would not have been here receiving these honors,” said Ethel Mercado, State President who concurrently serves as Philippine Honorary Consul – General for Texas and National Chair of the U.S. Federation of Phil – Am Chambers of Commerce (FPACC). Their Chamber F ederation’s “Operation Save Lives” national initiatives have raised close to $1 million for the victims of super – typhoon Haiyan. During their trip to the Philippines on October 17 – 27, 2014, their 50 – delegate strong Trade Mission group will be visiting Le yte and Cebu, where they adopted a neglected island of 6,000 residents for a full year of reconstruction and rehabilitation, in partnership with the ICCP Foundation, OWI and other NGOs on ground.

OUTSTANDING PROJECTS OF THE PHILIPPINE – AMERICAN CHAMBER OF COMMERCE

Humanitarian Projects (Our Medical Mission for the typhoon and flooding victims in the Philippines treated a record 1,642 medical and dental patients in one day. Also ra ised almost $1 million for their relief and rehabilitation.

Our Trade and Investment Missions to the Philippines generated more than $40 million for the Filipino businessmen and women and boosted the Philippine economy through business partnerships, imports and exports.

Our Consular Outreach projects in Texas that you are now helping you, have already saved more than 20,000 Filipinos in Texas and neighboring states about $13 Million by not having to travel to L.A. for the consular services.