2017 introduced us to new members and new friendships; opportunities to learn & grow and most importantly it brought our communities closer together.

Our Monthly Speaker Series covered topics from Small BusinessHealth Options to Access to Capital to Discrimination in the Workplace. Then, Hurricane Harvey arrived in August 25th delivering over 30 inches of rain, submerging 30% of Harris County and causing over $180B in damage. Many families lost their lives, their homes and livelihoods.

Texas may be the second largest state and Houston only the fourth most populous city in the U.S., but the one thing for certain is the big heart of a Texan.

Like others around the city and state, our very own brothers and sisters from the Rio Grande Valley Region and the Greater Dallas Region rented trucks and came to our rescue delivering food, drinking water and necessary supplies. What a great effort!

I pray that 2018 brings all of us a brighter tomorrow to learn, to grow and to serve. HOUSTON STRONG! 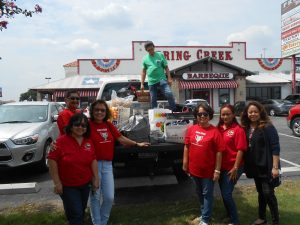 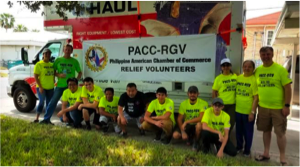 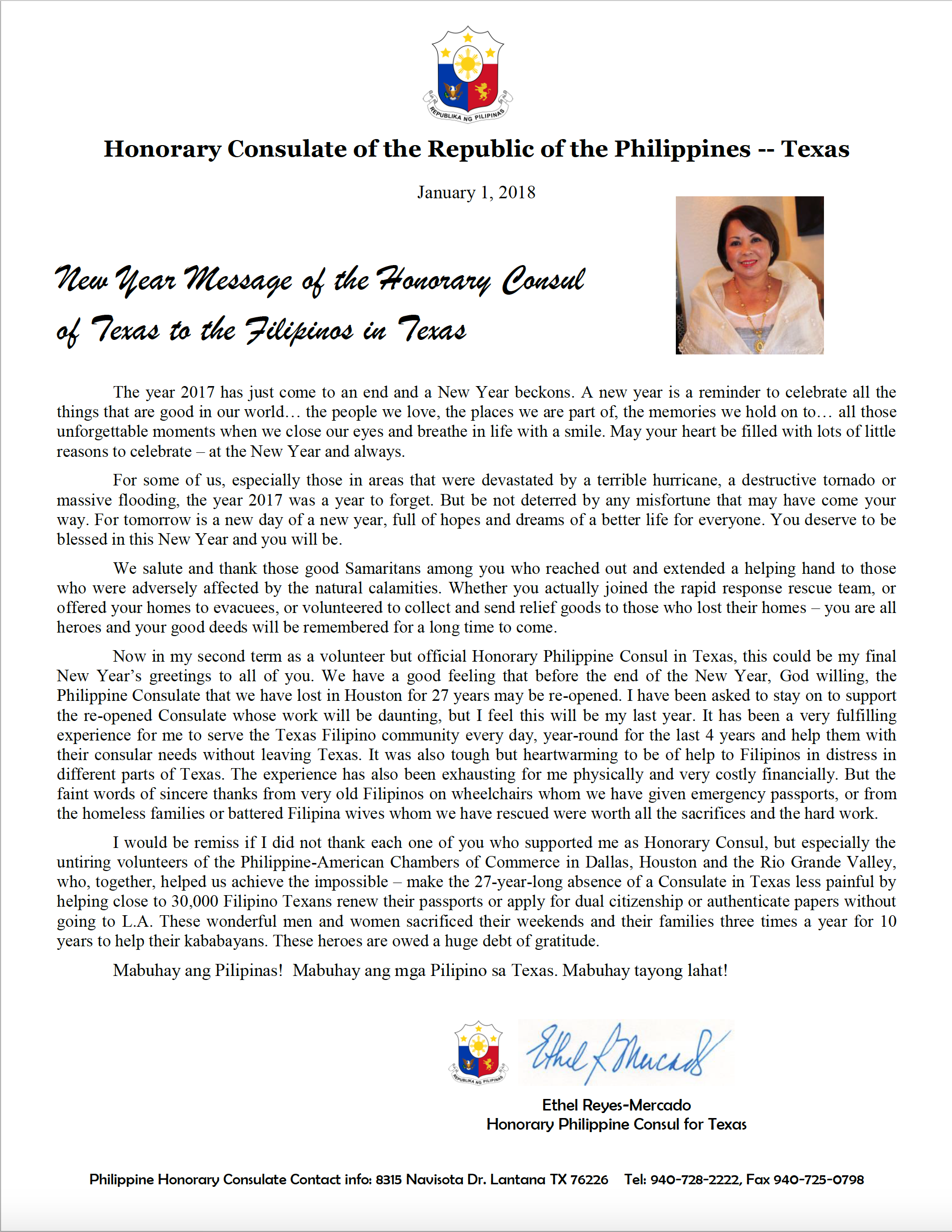 Wishing you all a very Merry Christmas. Greeting card.

Join our newest corporate member, Amazing Enterprise – An Authorized Saladmaster Dealership on January 14, 2018 as they present to you:

An Amazing Night with Joey Albert 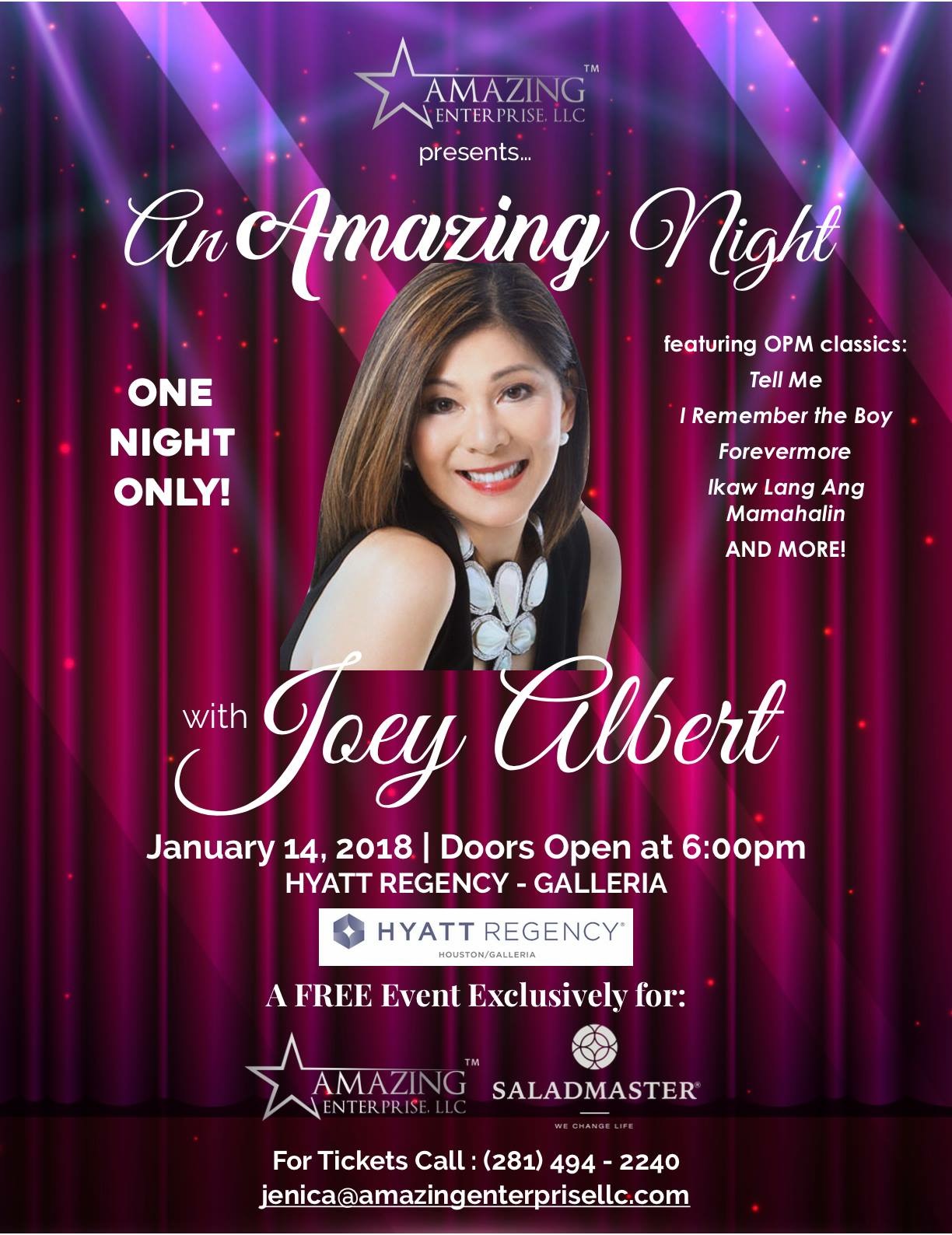 There is a word in the Filipino language that describes a disaster that happens when an upcoming event is prematurely announced or a game or an election is prematurely called. The word is “bulilyaso.” The closest translation of this into English is “jinxing it” when some stupid outsider tries to influence and poison the environment and as a result, the important event that everybody is waiting for is cancelled or executed disastrously.

The planned re-opening of the Houston Consulate after decades of Philippine government neglect of the Filipinos in Texas and in neighboring states of Oklahoma, Arkansas, Louisiana and parts of New Mexico is now a very sensitive issue that all of us should hope will happen, but leave alone until it really happens. If a good thing is meant to happen, it will happen. There is no need for anybody to push or pre-empt the decision-makers for one-upmanship or any other selfish reasons they may have for interfering.

The closing down of the Houston Consulate during the Cory Aquino administration for political and economic reasons has caused tremendous suffering on the part of the Filipinos in our region for almost 30 years who had to travel 1,600 miles both ways to the nearest consulate in L.A. for their basic consular needs. The very old Filipinos on wheelchairs who come to our Consular Outreach project cry tears of gratitude saying: “Hulog po kayo ng langit sa amin, we can no longer survive a trip to Los Angeles!”

Thanks to the creation of the Honorary Consulate in Dallas and the deputizing of the Philippine-American Chamber of Commerce who, working together, have helped tens of thousands of Filipinos especially in Houston in the last 9 years, this suffering of the Filipinos in our region has somewhat been mitigated. Since her appointment as a non-paid Honorary Consul with a full-time staff whose salaries she herself pays, Ethel Mercado has handled more than 2,000 cases and helped Filipinos in South, West and North Texas with their problems 6 days a week, year-round. She has also attended to the needs of numerous Filipinos in distress in different parts of the state, in prison, in hospitals or in homeless shelters, or mail-order brides who are being abused by their American husbands to name a few examples.

In the 9 years that the PACC Chambers of Houston, Dallas and McAllen have hosted and managed the Consular Outreach program, they have served more than 25,000 Filipinos in Texas and in neighboring states 8 times a year and saved them $12.5 million in travel costs. Former Consul General Mary Jo Aragon described this project of PACC as “community service at its finest!” Unfortunately, these sacrifices on the part of the consular officials who visit Texas 8 times a year, the untiring Chamber volunteers in the three cities and the quiet but very effective Honorary Consul Ethel Mercado are not enough. The demand for consular services is so great, for every 1,000 Filipinos that we served, another 1,500 had to be turned away. It was in fact the recorded sacrifices and hard work of the PACC volunteers for 9 years and the year-round pro-bono services of the Honorary Consul in Dallas in the last 4 to try to solve a much bigger problem that helped add much needed strength to the proposal to re-open the Houston Consulate.

Hence the need to re-open the Houston consulate, a project that had been extensively discussed and debated through five different administrations (Ramos, Estrada, Macapagal-Arroyo, Aquino and Duterte).

With all due respect, it is very wrong and downright shameless for one person or group of persons to claim credit for the planned re-opening of the Houston Consulate based solely on one letter that received a non-committal courtesy response from an aide to the new Secretary and on one innocuous recent visit to the Department of Foreign Affairs.

Claiming credit for a huge million-dollar project that one did not work for or helped approve would be a huge insult to many important people who had lobbied for many years to re-open the Houston Consulate, including former Ambassadors, former Consul-Generals and friends of the Texas Fil-Am community in Malacanang and in the DFA. It would be an insult to the careful and judicious planning and detailed due diligence by sympathetic individuals and groups who supported the cause through the years.

Here are the facts:

We tried to keep these facts under wraps for a long time for fear of being jinxed, but in view of the growing misinformation through social media perpetrated by the shameless posturers and credit grabbers, we feel an obligation to share these facts which we have known for a long time, but never talked about. Should you be interested in confirming these facts, feel free to contact any or all of our former Consul-Generals in L.A. who are now in Manila who have worked on this, or any of our former Ambassadors from Hon. Raul Rabe to Hon. Ernie Maceda to Hon. Joey Cuisia.

for the appointment of a second Honorary Consul for Houston. Unfortunately, our secret vetting of potential candidates in Houston did not result in a single one who was willing to work an essentially full-time job without a salary, and on top of that, to personally be responsible for about $75,000 annual budget for staff and office expenses without help from the Philippine government. Many were excited to vie for the position, until they found out that they will be working full time pro-bono, and will be spending a lot of out-of-pocket money to do the job.

Respect the chain of command and you will be served promptly.

On our request, the Philippine government may soon issue a press release on the Consulate re-opening project. Meanwhile, the Honorary Consul for Texas, Mrs. Ethel Reyes-Mercado will be happy to answer any questions or provide consular services that you may need. For those who are not aware, Hon. Consul Ethel Mercado has an office in Dallas that provides some consular services year-round, 5-6 days a week, 9am to 6pm. (See attached articles). In-between the 8 consular outreach weekends in Houston, Dallas and McAllen, the Honorary Consulate in Dallas provides emergency passports for those who have to urgently leave for the Philippines but whose Philippine passport has expired, special powers of attorney, reports of birth, reports of marriage, document authentication, application for Philippine visas for U.S. nationals, etc. She also attends to Filipinos in distress anywhere in Texas. Her office is busy all day long fielding phone calls and attending to the needs of Filipinos, many of them from Houston and South Texas. For these services, so you don’t have to go to L.A. or wait for the next outreach. You may call Hon. Consul Ethel’s office at (940) 728-2222 any day of the week and request an appointment. Emergency consular documents are usually given to you on the same day. (Please share this information with your members, constituents and circles of friends who may need the services).

Chief of Staff to the Honorary Consul in Texas