When is the Houston Consulate opening for service? Will there be more Consular Outreach in Dallas, RGV, San Antonio?

The Office of the Honorary Consul Ethel R. Mercado receives numerous inquiries about this subject every day since the re-opening of the Houston Consulate was announced. The best information we have on it that we are free to share is at best tentative. The core members of the consular officials have already arrived in Houston and are feverishly preparing all the logistics and permits needed to open the office, which is proving to be more exhaustive and time-consuming than anticipated, as every transaction big and small must be approved not only by the DFA but also by the U.S. State Department. So the initial plan for a soft opening in late summer could be delayed. As soon as we receive official word from the DFA and the new Consul General, we will quickly inform you through this very widely circulated PSA. The message from the new Consul General to the Texas community is to please bear with them and have patience, as all efforts are in earnest towards this end.

Meanwhile, in view of the delay in the opening of the Houston Consulate, the plans for Consular Outreach in Dallas, McAllen and maybe San Antonio which had been shelved may be revisited before the end of the year to help our kababayans who need the services urgently, and for sure in 2019 as needed. Texas is geographically bigger than California whose two consulates regularly organize a dozen Outreach projects a year in the outlying cities in their jurisdiction.

Even if the Consular Outreach is discontinued as expected, the organizers Honorary Consul Ethel Mercado and the project sponsors, the original Philippine-American Chambers of Commerce of Texas (PACC Texas in Houston, Dallas and McAllen) are very happy and proud of what they have accomplished – helped more than 30,000 Filipinos in Texas and neighboring states in the last 10 years and saved them the trouble and a total cost of $15 million by not having to travel to the L.A. Consulate to secure the consular services. Texas had been without its own consulate for 27 years. And the pro-bono services given by the Honorary Consul and the Consular Outreach program are not enough to meet the growing demands of a very fast growing Filipino community.

Until further notice and at least through 2019, the Honorary Consulate in Dallas headed by Hon. Consul Ethel Mercado will continue to grant emergency passports (travel documents) for those who have to go home urgently but with expired passports. It will also continue to process SPAs, Authentication documents, Reports of Birth and Marriage, and other consular documents. Call Consular Assistant Nelia Africa for appointment:  940-728-2222 or email nafrica1@verizon.net. The Dallas office is open 5 days a week from 9 am to 5 pm. Requests for emergency passports are usually processed on the same day. 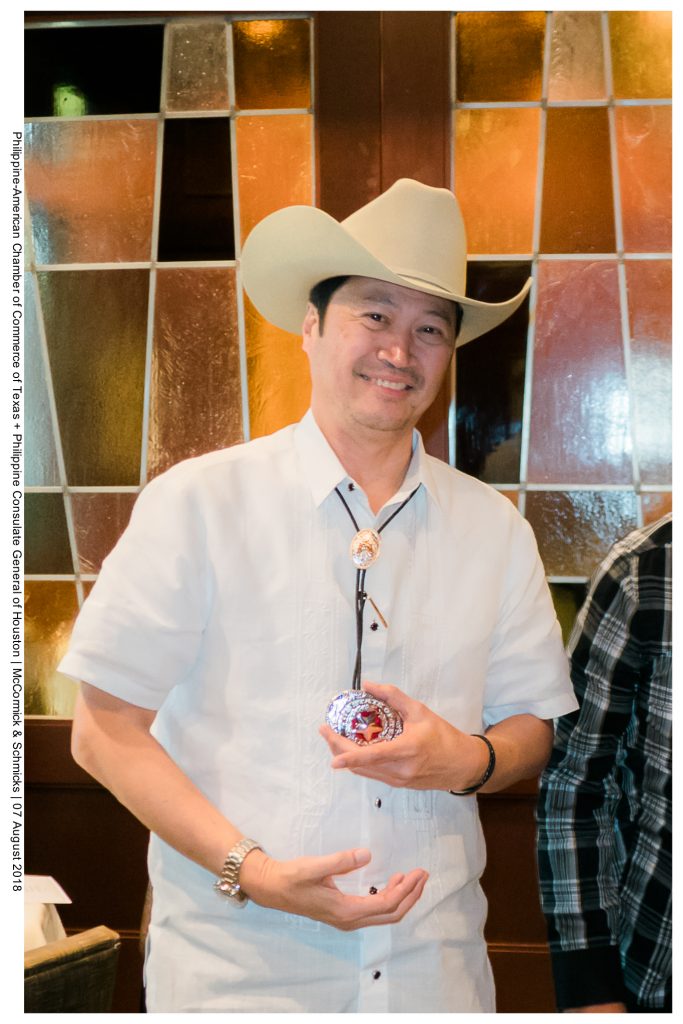 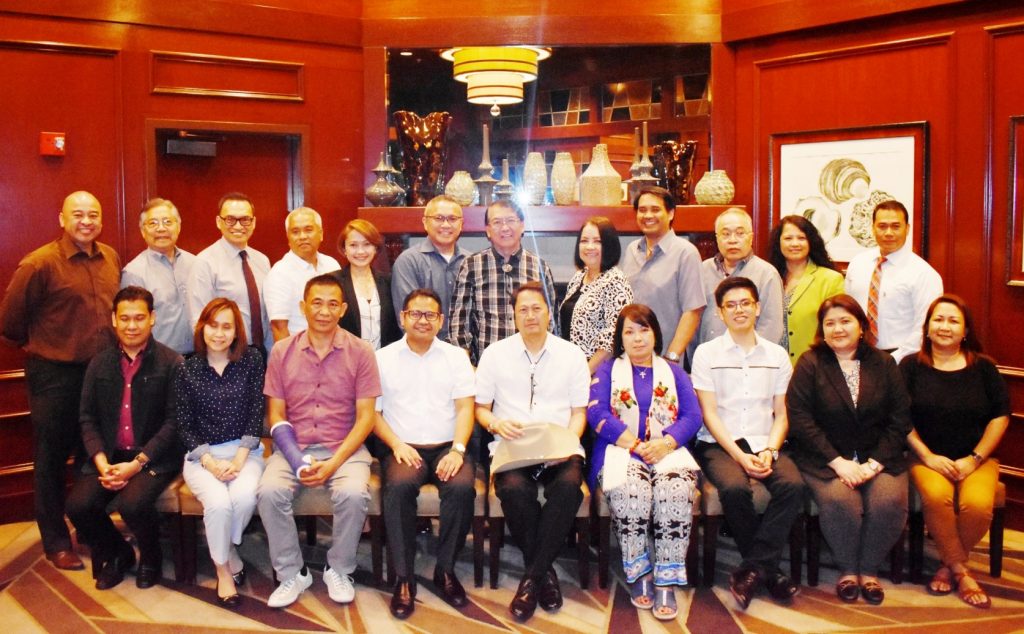 During the newly-appointed Consul General’s initial visit to Houston, he was welcomed by the Office of the Honorary Consul and the officers of the Philippine-American Chamber of Commerce which have assisted the Consulate with their consular services in Texas by sponsoring and managing the Consular Outreach for the last 10 years in Houston, Dallas and the Rio Grande Valley. The affable Consul General Jerril Santos appreciated the warm welcome and looks forward to meeting with all the Filipino organizations in the State.

Until our next PSA bulletin, Mabuhay!  (Reactions to these articles may be sent to servannounce@gmail.com or nafrica1@verizon.net) Please also send an email if you want to opt out of our future PSA bulletins.)

We opened the evening with a very warm welcome from Ms. Jessica Tecson, Vice President of Amegy Bank who is also one of our new members. Jessica shared with us the history of Amegy Bank, its branches, products and services.

Led by Region Chair, Ricky Guinhawa, the members participated in a Get Acquainted exercise to learn about each other. This was followed by the introduction of the board of directors, a review of the orientation guide, certificate and pin presentation; and finally a Q & A session.

The Greater Houston Region Speaker Series was a big success. Corporate partner PLDT U.S. presented “Philippines: The New Gateway to Asia – Powered by PLDT.” The PLDT U.S. executives covered the company’s infrastructure and investments in the Philippines as well as partnerships around the globe. 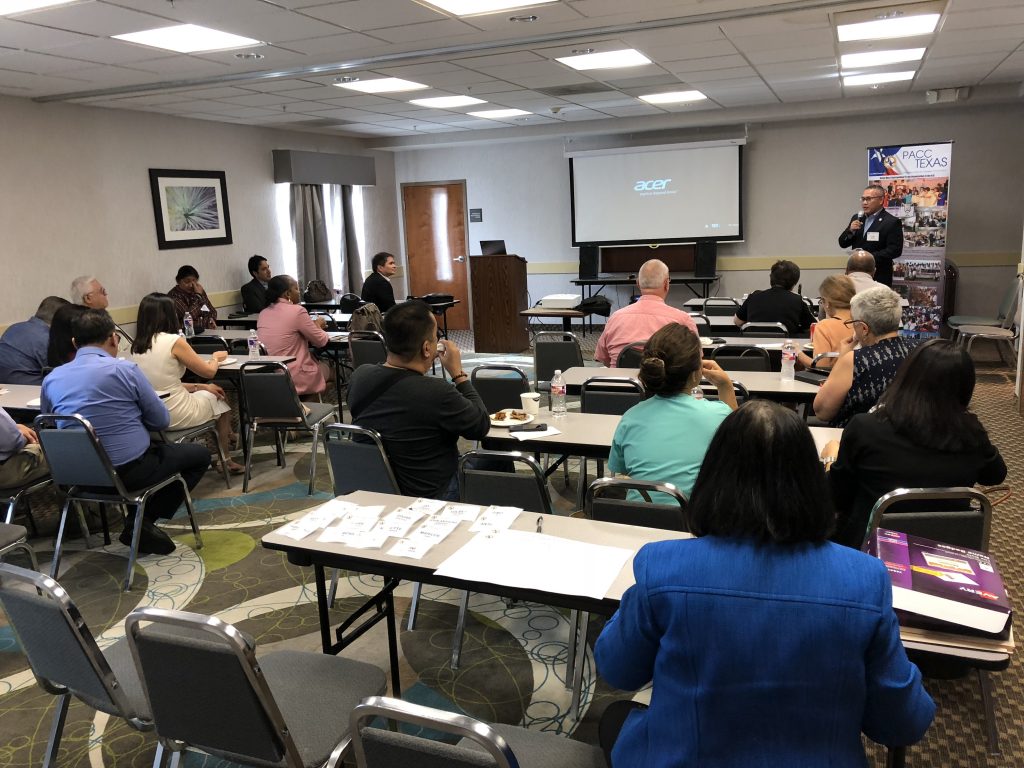 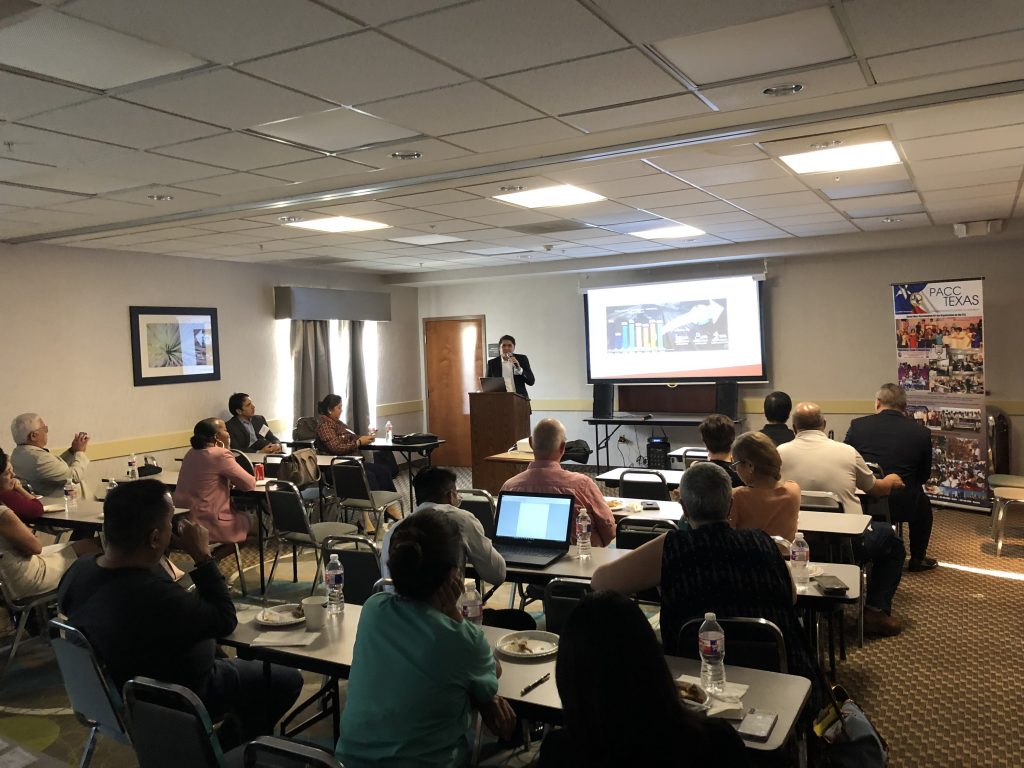 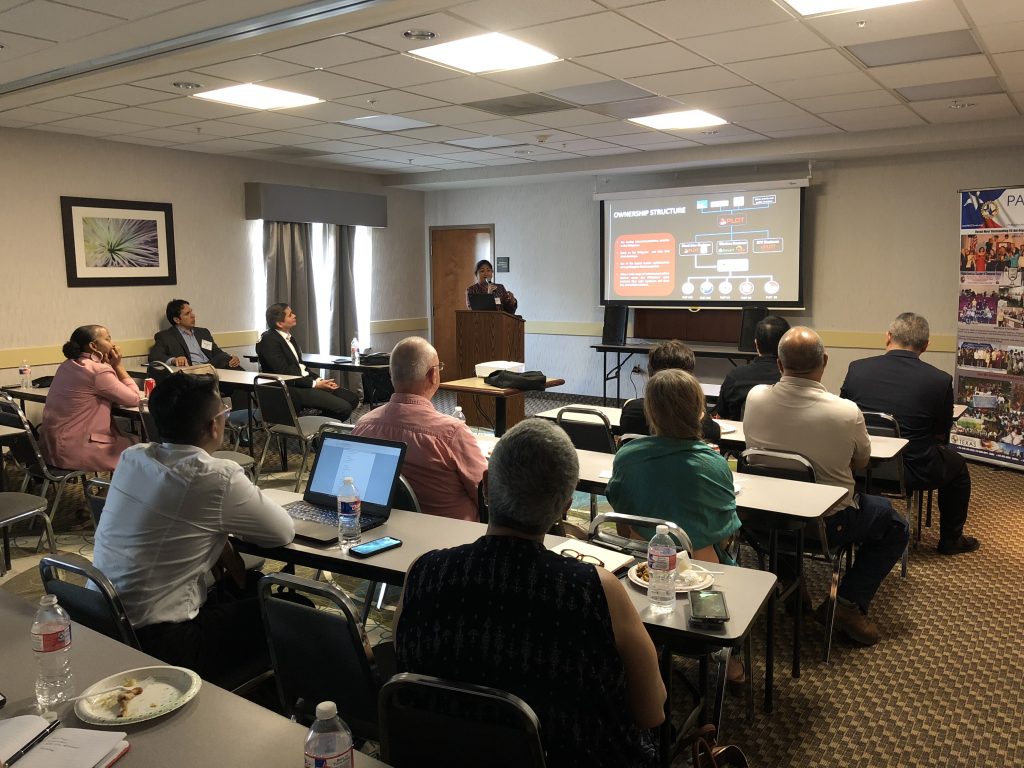 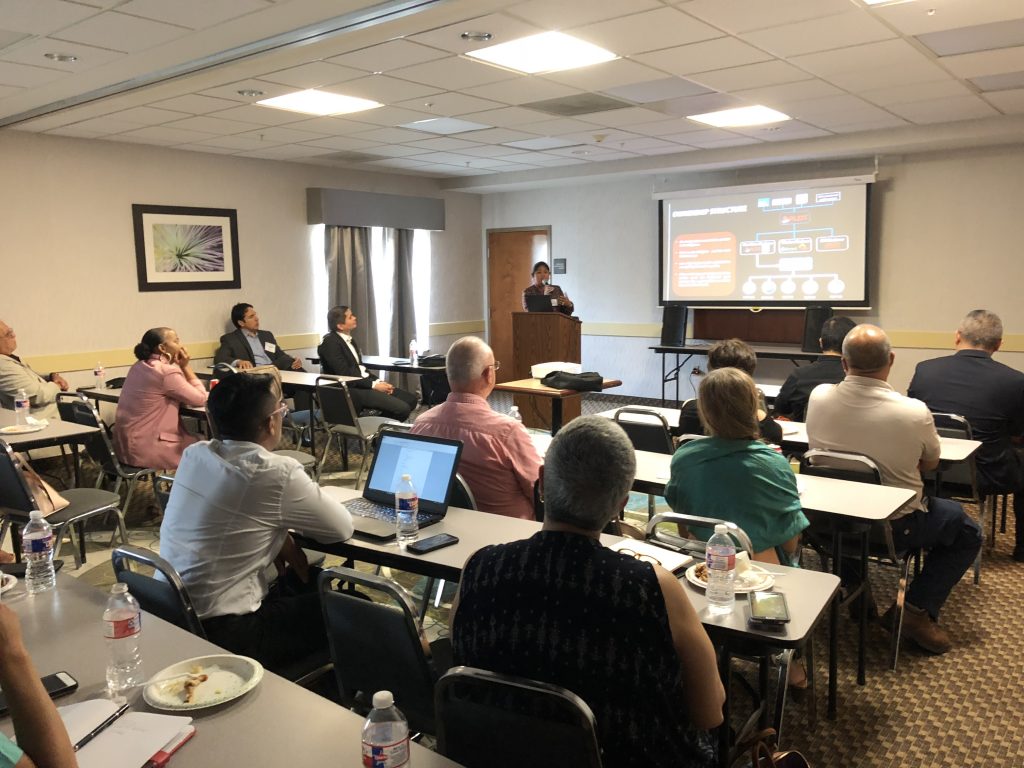 If you happen to be in Dallas, you are all invited to attend and enjoy the presentation of our PACCT- BOD,

Edgar Malicdan  , promoting his business in  advocating Wellness, Fitness and Healthier Life, together with his wife Ann,
who will revitalize and invigorate us with  her  Zumba lessons.  (easy-to follow steps you can do at home and lose weight ).
With that said, come in your in gym attire on Friday, July 27th ..listen, be informed and get into Zumba  with
Ann…
Please send your RSVP by July 24th  to our Secretary.  Emilie McSweeney  via email:  ms_ems@yahoo.com

Bring your friends to enjoy and invite them to be a member of the Chamber. We look forward to see everyone there. 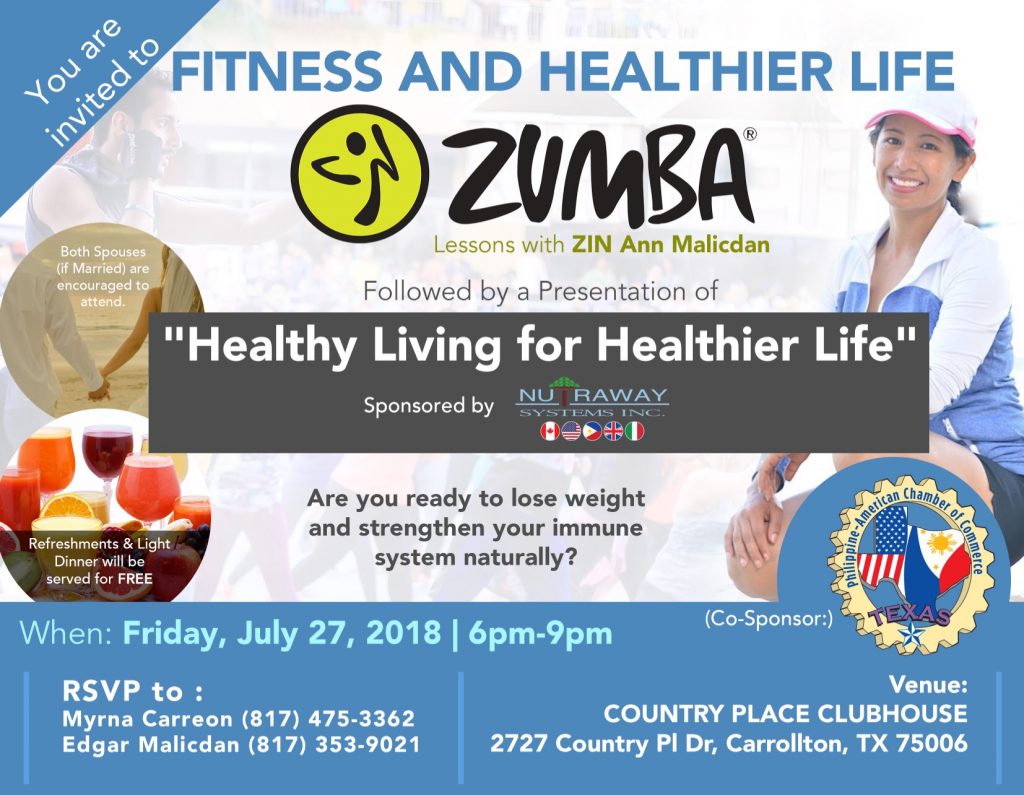